Ecological footprint (or EF) analysis provides a broad measure of the land and sea area required to sustainably support a particular lifestyle or community. It is measured in world average productive hectares, referred to as ‘global hectares’ (gha). The use of area as an environmental measurement unit makes it a powerful and resonant means of communicating environmental impact and assessing progress towards sustainability. It also allows for benchmarking across cities, regions and nations, highlighting where consumption of energy and materials is exceeding environmental limits and provides a measure for “one planet living” – currently 1.8 gha per person. The UK has an EF of 5.3 gha/person (based on 2004 figures), meaning that if everyone in the world lived like the average UK citizen, we would require almost 3 planets to sustain us all. Lifestyles in the south east of England are even less sustainable, with an average EF of 5.63 gha. 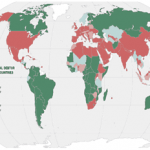 From a natural resource management viewpoint, Ecological Footprint analysis is a valuable tool for development that provides a measure of what needs to be achieved through tackling “over-consumption” in the north, whilst simultaneously addressing poverty in the south. When the area of a country is portrayed as its national ecofootprint expressed as a proportion of the total global ecofootprint, inequities around the globe become starkly clear

The South East Diamonds for Investment and Growth (SEDfIG) is a coalition of cities, towns and their surrounding areas committed to realising their potential for sustainable economic and community growth in the south east of England. The SE Diamonds originated in South East England Development Agency (SEEDA)’s 2006 Regional Economic Strategy (RES). They were there identified as the ‘sub-regional functional areas’ with the greatest potential for significant contributions to economic growth in the south east. 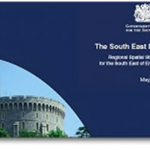 SEEDA’s designation of the SEDfIG was based entirely on economic evaluation – GVA (Gross Value Added) is the dominant feature of the assessment made, alongside a variety of other financial flow data, with no accompanying use of indicators of ecological sustainability. Given the high resource consumption historically involved in delivering conventional GVA growth, the first headline target of the South East Plan (SEEDA, 2007) and RES Implementation Plan – achieving an average annual increase in GVA per capita of at least 3% – is potentially in conflict with the third headline target, which addresses the need to reduce the ecological footprint. ‘Diamond’ Local authorities are highlighted in red. 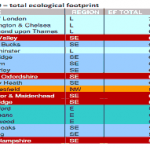