This project ran from 7 June 2004 – 6 June 2006, and was implemented by Landell Mills Ltd in association with Cefas, UK and Naturebureau, UK. It was initiated with the expectation that Azerbaijan, Kazakhstan, Russia and Turkmenistan would participate equally as EU-Tacis beneficiaries. The Islamic Republic of Iran was also invited to join, as a non-recipient of aid, owing to its unquestionable role in the management of Caspian fisheries. Ultimately Azerbaijan, Kazakhstan and the IR of Iran were the most active participants. The project was based in Baku in Azerbaijan for its first 18 months, then moved to Almaty in Kazakhstan for the remaining six months. Dr Chris Mathews led the project for the first year, after which he was replaced by Dr Nick Willoughby of theNRgroup.

The project’s objectives were:

The sturgeon fisheries of the Caspian Sea are recognized as being in a parlous state, much of which is probably due to illegal, unlicensed and unregulated (IUU) fishing which is aimed at catching adult specimens for their eggs – caviar. Five species of sturgeon co-exist in the Caspian – the giant beluga Huso huso, Russian sturgeonAcipenser guldenstadtii, stellate sturgeon A. stellatus, fringe-barbel sturgeon A. nudiventris, and Persian sturgeon A. persicus. Combined catch data show a decline from about 30,000 tonnes/annum (tpa) in the 1970s to approximately 2,000 tpa now. Unfortunately, the view that Iranian techniques for the recovery of Persian sturgeon (A. persicus) were highly successful, while those of the northern countries for the other species were unsuccessful, was not regionally popular, so the possibility for regional agreements on remedial measures was small.

Some results from a regional research cruise in Iranian waters, including a 2.3m specimen of the Beluga Sturgeon, Huso huso (bottom) – now increasingly rare

Despite its short time-frame, significant management problems, and an enforced change of base from Baku to Almaty the project achieved several notable successes.

There were, however, some significant failures in project implementation, several of which were identified in the project documents as assumptions and risks. 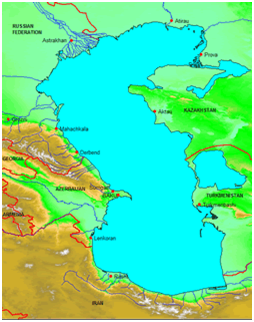